Spice up your routine with the SRF Crafted Seasoning Pack, a foursome of flavors for any Snake River Farms beef or pork cut. Learn how these seasonings were created with insight from barbecue champion Steph Franklin and learn his suggested cuts to pair with each one.

The SRF Seasoning Four-Pack makes an excellent gift on its own or paired with any Snake River Farms personal or corporate gifts. But don’t take our word for it!

We caught up with barbecue champion and owner of Simply Marvelous BBQ Steph Franklin between pit sessions to get his insight into these unique spice combos. He developed each of these rubs through trial and error, working to find the perfect blends that bring out all the delectable nuances in American Wagyu beef or Kurobuta pork.

The Genie in the Pit

They call Steph the Genie for a reason. With more than 25 barbecue championships under his belt, a place among the 2017 California Barbecue Association Hall of Fame class and a thriving mobile catering company called Simply Marvelous, the title seems accurate. Especially when he comes up with ingenious solutions to hurdles during competition — like the time Franklin’s brisket was too hot to slice with mere minutes counting down to deadline.

“It started crumbling because it was too hot,” he says. “I didn’t freak out. I sat there for 15 seconds, then the light bulb hit me: Go to the RV and throw it in the freezer!”

Two minutes of cooldown felt like forever, but it did the trick. “I got the slices.”

But then a packed crowd stood between Franklin and the turn-in table. “I’m running, and one of my buddies played fullback for me. We got there with 20 seconds to spare, and I got third place.” Before he pulled savory-sweet victory from the jaws of defeat, this South Side Chicago native adopted barbecue as a way to eat cheaply while earning a master’s degree in higher education at Southern Illinois University. An administrative job at UC Santa Barbara brought him to California where he has lit up the local barbecue scene. And we’re so glad he did! 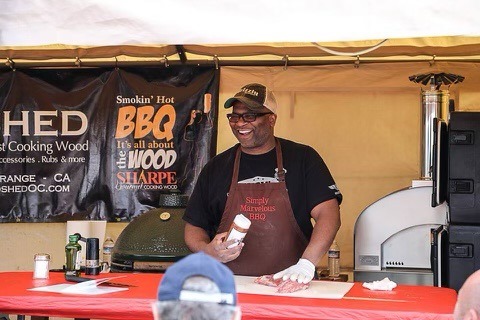 At Snake River Farms, we do things differently — and we love teaming up with other game-changers. Once we sampled Franklin’s unique take on eclectic barbecue, we knew he was destined to be our seasoning BFF. And the feeling is mutual.

“Snake River Farms meat is second to none,” he says. “What they do is exceptional.”

Franklin brought to the table many years of experimenting with flavor to develop four distinct seasonings that are as singular as American Wagyu steaks and Kurobuta pork short ribs.

• SRF Rosemary Roast Seasoning - This combo of rosemary, garlic, onion, pepper and salt is perfect for prime rib and other rib roasts, Franklin says. “It doesn’t overpower the meat, but it’s decadent.”

• SRF Santa Maria Seasoning - This kosher salt-based blend delivers balanced peppery and garlicky notes with a kick. “It’s an explosion in the mouth,” Franklin says. Try it on a Tri-Tip for the classic SoCal experience.

• SRF Perfect Pork Rub - Franklin combined his Simply Marvelous Cherry and Pecan rubs to bring out more sweetness and depth in chicken or any cut of Kurobuta pork — which he describes as already having powerful flavor. “The [deep red-brown] color you get is like nothing else.”