Kurobuta hams are one of the most special products we offer at Snake River Farms. The people who buy our hams are some of our most passionate and loyal customers! Each ham is sourced from 100% Berkshire pork, cured using traditional methods and smoked over real hardwood. This guide is designed to help you get the best possible dining experience.

Although Snake River Farms Kurobuta hams are impressive on the table, they’re extremely easy to prepare. All Snake River hams are fully cooked, but for the richest flavor, they are best fully baked. Use the following instructions for a perfectly prepared ham you’ll be proud to serve.

BONELESS OR BONE IN

HOW MUCH HAM SHOULD I BUY?

HOW DO I THAW MY HAM?

HOW LONG DOES IT TAKE TO COOK A HAM?

1. THAW - Set your ham on a tray and place in the refrigerator. A Whole Bone-In ham can take 3 to 4 days to thaw. Not enough time? See Quick Thaw Method.

4. PREPARE - Place ham, fat side up in a roasting pan or rimmed baking sheet. If cooking a half ham, place the flat side down in the roasting pan.

5. BAKE - Set ham and roasting pan in the heated oven. Leave in oven until the ham reaches an internal temperature of 140°F when checked in the center of its thickest section.

6. REMOVE – Pull the ham from the oven, cover loosely with foil and let it rest for 15 to 30 minutes.

7. SLICE & SERVE – Boneless hams – cut on the shorter side. Bone-in hams – find the bone, cut off large pieces and slice against the grain. See our short video “How to Slice a Bone-In Ham” for complete directions. 1 – Boneless Half Ham - Also known as a “deli ham” because it’s so easy to slice for sandwiches, our boneless hams are made from the same Kurobuta pork and cured exactly like our bone-in hams. Average weight: 3.5 lbs.

2 – Boneless Whole Ham – The full version of our boneless ham is the height of convenience. Since there is no bone to deal with then can be sliced and plated with minimal effort. Average weight 7 lbs.

3 – Bone-In Half Ham, Small – This is our Whole Bone-In ham cut in half. Since there is natural variation in size, we sort the half hams into two sizes. The small size average weight is 6 lbs.

4 – Bone-In Half Ham, Large – A larger portion of the half bone-in ham. The bone helps surrounding meat cook to a juicier, more tender finish. Each one weighs an average of 8 lbs.

5 – Whole Bone-In Ham – The original Snake River Farms ham, packed with rich flavor and distinct texture. The bone adds a traditional presentation and is the foundation for flavorful stocks and soups.
This large ham is an average weight of 16 lbs.

BONELESS OR BONE IN?

Bone-in and boneless hams each have their advantages. Select one depending on which benefit is appeals to you the most.

If you want a classic ham with a traditional appearance on the table, go with a bone-in ham. The bone helps surrounding meat cook to a juicier, more tender finish. The leftover bone is a flavorful foundation for stocks and soups, providing an additional meal.

Choose a boneless ham if you value convenience. Our boneless hams are made of the same high-quality Kurobuta pork and cured just like our bone-in hams, but they can be quickly sliced and plated at the table.

HOW MUCH HAM SHOULD I BUY?

We recommend at least 8 ounces for each person at your table. If you want to have leftovers or your crowd is full of hearty eaters, use 12 ounces for your calculations. The following is a conservative guide to the number of servings for each of our hams. HOW DO I THAW MY HAM?

Our hams ship frozen and it’s best to fully thaw them before cooking. Put your frozen ham in the refrigerator several days before you plan to serve it. Thawing in a refrigerator is highly recommended as it is the best way to ensure food safety. Snake River Farms hams range in size from about 3.5 lbs for a Small Boneless Ham and up to 16 lbs for a Whole Bone-in Ham, so the actual time to thaw will vary greatly.

Once completely defrosted, our hams will keep for up to 30 days in their original sealed packaging, so we recommend placing your ham in the refrigerator well in advance of the day your plan to prepare your meal.

Sometimes things just don’t work out as planned and you need to speed up the thawing process. You can use a cool water bath to help quickly thaw a frozen ham. Keep your ham sealed in the original packaging. Close the drain to your sink and fill with cool tap water. Place ham in water and allow to sit. A half bone-in ham can thaw enough to bake in about 3 to 4 hours. A whole bone-in ham will take more than 4 hours.

PLEASE NOTE: We DO NOT recommend this method in normal situations. It is for emergencies only. For best results, please plan ahead so your ham thaws slowly and safely in your refrigerator. HOW LONG DOES IT TAKE TO COOK A HAM?

All our hams are fully cooked, so baking times are short. Depending on the size, the time varies from about one to four hours. (See chart for estimated times.) Don’t rely on time. Use a meat thermometer to find the exact time to remove your ham from the oven.

The goal is to fully heat the ham to 140°F, when measured at the thickest part. When checking the temperature of bone-in hams, check the thickest part away from the bone. It’s a good idea to check several areas throughout the ham.

140°F is the magic temperature to ensure a moist and juicy ham. Higher temperatures will adversely affect the quality, so avoid overheating. PREPARE THE HAM
Remove ham from any packaging. Place fat side up in a roasting pan. If using a half ham, place the flat, side directly on the roasting pan. Do not add water or cover the ham with foil.

BAKE
Place the ham in the heated oven, uncovered, until the ham reaches 140°F. As you know, every oven is different so cooking times will vary. A thermometer is the single best way to determine doneness. See the ham chart for approximate cooking times, but use a thermometer to decide the right time to remove your ham from your oven.

REMOVE FROM OVEN
Take the ham out of the oven and place on a cutting board.

REST
Loosely cover ham with foil and allow it to rest for 15 to 30 minutes.

SLICE AND SERVE
For bone-in hams, the best technique is to cut large sections of the ham parallel to the bone and cut these portions into slices.

See our short video “How to Slice a Bone-In Ham” for complete directions. PRE-HEAT GRILL
Pre-heat grill on one side. The idea is to have direct heat and flame under half of the grill and use the other half as an oven to heat your ham. The goal is to create a temperature of about 325°F on the cool side when the cover is closed.

PREPARE THE HAM
Remove ham from its packaging. Place on cutting board or platter for transfer to grill.

GRILL HAM
Place the ham directly on the cool side of the grill with the fat side up. If using a half ham, place the flat side down. The ham will cook using indirect heat. Check to make sure there are no coals or direct flames under the ham.

REST
Loosely cover ham with foil and allow to rest for 15 to 30 minutes.

SLICE AND SERVE
For bone-in hams, the best technique is to cut large sections of ham off parallel to the bone and cut these portions into slices.

See our short video “How to Carve a Bone-In Ham” for complete directions.

Add extra smoky flavor to your Kurobuta ham by turning your charcoal grill into a smoker! Place a disposable aluminum pan below the main cooking grate. Place pre-lit charcoal briquettes on both sides of the pan to create a cool zone in the center of the grill below the ham. Add 2 to 3 chunks of your favorite smoking wood, such as cherry or apple , to the charcoal, and return the main cooking grate to the grill. Let it smoke until the ham reaches an internal temperature of 140°F. 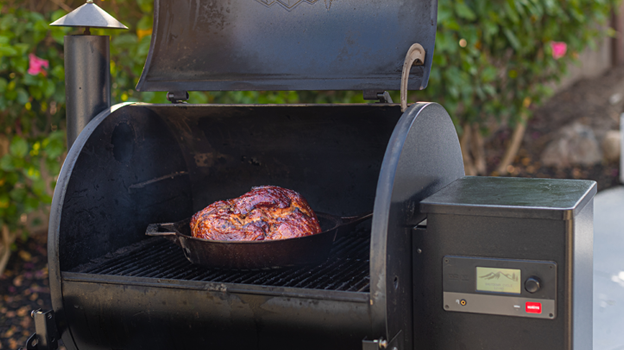 PREPARE THE HAM
Remove ham from any packaging. Place fat side up on a rack in a roasting pan. If using a half ham, place the flat side directly on the rack.

SMOKE
Place roasting pan with the ham on the grill grate. Smoke the ham for 2 hours. Increase the temperature to 300°F and continue to roast the ham, misting occasionally until the internal temperature reaches 140°F. For a Whole Bone-In Ham, this will be about 3 to 4 hours.

REMOVE FROM GRILL
Take the ham out of the oven and place on a cutting board. Turn the pellet grill off.

REST
Loosely cover ham with foil and allow to rest for 15 to 30 minutes.

SLICE AND SERVE
For bone-in hams, the best technique is to cut large sections of ham off parallel to the bone and cut these portions into slices.

See our short video “How to Carve a Bone-In Ham” for complete directions.

Our savory Kurobuta hams are superb all by themselves, but if you want the extra sweetness of a glaze feel free to use one. Using a sharp knife, make ¼-inch vertical cuts in the ham about 1 inch apart. Bake, smoke or grill the ham until it reaches 130°F, then coat with the prepared glaze. Continue to heat until the ham reaches an internal temperature of 140°F. then remove from the heat source and rest.